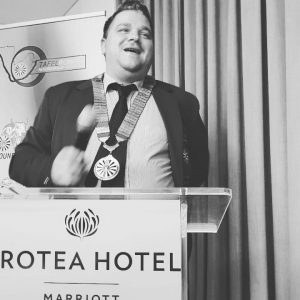 Firstly, thanks to all who travelled from far and wide to attend ARTSA 2018 in Upington, Northern Cape. A huge shout out from my side to Hilton Quack Quack Megaw for convening and absolute fantastic ARTSA with the help of his committee. For many a fresh tabler in clubs all around our country there is a saying that you have not tabled if you have not attended an ARTSA. For myself, this rung absolutely true when I attended my first ARTSA 4 years ago, since then, I have not missed one – and hopefully, I’ll be privileged enough to never miss any.

What I did not know, is how much planning and time goes into the organizing of such an event. To all previous ARTSA conveners and committee members, well done, a tip of the hat to each and every one of you. It is indeed a selfless job, and you will never receive enough thank you’s in return.

As a Upington 79 tabler I would like to thank all who attended ARTSA. It is truly an honour to be associated with Round Table, but even more so after our town was bombarded with tablers from around the world. We have received nothing but thanks, praise and well wishes from local business owners, guest houses, and as a whole, the liquor industry.

The feedback from the Protea Hotel as follows: “We have never had so many people in our conference venue at once, but we have never had such a friendly, well-mannered bunch of guests either. Everyone’s support was fantastic and we would welcome your organization back with open arms.”

Another local charity, with whom Upington 79 Round Table has a great relationship, the Vryburgers, ran the Hard Core Hut bar. For those who do not know, although we have a profit split agreement in place, with money going back to ARTSA’S budget, the profit made by the Vryburgers will be well spent on charitable causes in the local Upington community. So thank you for spending all those tokens and yet again making a difference. We met up with the Vryburgers after ARTSA and had a few cold ones, the feedback from their side is unbelievable. Firstly, they are ecstatic with the amount of profit they made, even with very, very reasonable prices on all drinks. Some might say that it was to reasonable! They ran out of Jaggermeister on Thursday night, Friday morning around 03:00. They tried sourcing from other bars in town but it seems that Tablers did sample Jagermeister at every watering hole in town. In the end, Jagermeister was obtained in Kimberley, and then travelled to Upington where it arrived in time for Friday night’s activities. They were most impressed with the friendliness of all tablers, the great manners, and the way to people with rondel’s meet for the first time at the bar, and fight over whose tokens will be used to buy the next round. The one and only complaint from their side is that they are sorry to everyone they had to say no to who wanted to buy them another shooter, and which they had to decline after the previous twenty customers had exactly the same idea.

Gentleman, Upington Round Table 79 has always had a great reputation in our local community. With the way you all handled yourself in our town as visitors and guests to ARTSA 2018 while wearing your Rondels with pride everywhere you went, we now have more than a great reputation. We now have a legacy.